It’s my pleasure to introduce you to my friend Master Sang Koo Kang. 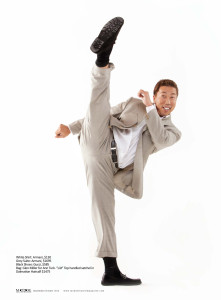 Master Sang is one of the most impressive school owners I’ve encountered during my career. He currently operates 6 martial arts schools in Miami, Florida. He trains a number of celebrities. He’s made it into the movies. And, it goes without saying that he’s a martial arts millionaire.

Master Sang’s rags-to-riches story is so inspirational, it might just leave you in awe.

In fact, the most popular television show in Korea recently produced a full blown documentary on him. After it aired, Master Sang sent me the footage and asked me to review it. I agreed.

This was the best mainstream documentary I’ve seen conducted on a school owner. They really did it right. I was touched.

So I called Master Sang and told him that I was genuinely proud of him for the success he’s achieved and that I wanted to spread the word about his documentary to my network of GCI clients around the world. And that’s precisely what I’m doing here.

Now, I know you’re busy. But take my word for it— watching these video segments will be a VERY valuable use of your time. They are quite instructive…if you know what to look for.

For example, Master Sang’s story will give you many powerful ideas for enhancing your own celebrity as a martial arts school operator. It will inspire you to NOT quit when times are tough. It will get your creative juices flowing as an entrepreneur. It will shift your paradigms when it comes to the income potential and quality of life you can enjoy as a martial arts teacher. It will motivate you to take action on your own goals. It might just blow your mind!

Upon completion, you will probably have an entirely new outlook on how much more is possible as a martial arts school owner and how much more YOU are capable of accomplishing.